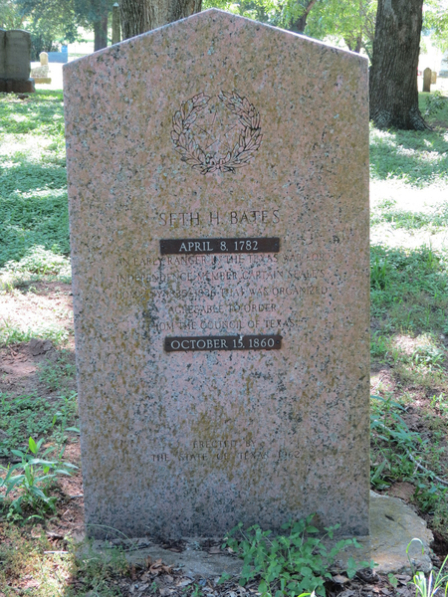 Seth Hurin Bates, the son of Uzal and Elizabeth Hurin Bates, was born in New Jersey on April 8, 1782.  The Bates Family settled in Hamilton County, Ohio circa 1792, where Uzal Bates was listed as a lieutenant in the Militia and a supervisor of highways in the Delhi Township in 1795.

Sarah died prior to 1820, the year that Seth and the children moved to Crawford County, Illinois where he married Anna Mann Doty.  They had no children, but he became the stepfather to her three children, Samuel, Levi, and James Doty.  In 1821, Seth was serving as Justice of the Peace in Crawford County.  In the fall of 1824, he moved his family to Cole County and settled in Lafayette Township on the Kickapoo River in the spring of 1825.

Seth was a neighbor to Daniel Parker in Cole County, Illinois, and he and his youngest son, Silas, traveled to Texas with the Parker group in 1833.  After a short stay, Seth returned to Illinois and then returned to Texas in 1835.  It cannot be determined whether Seth’s wife, Anna, was still living at this time since documentation of her death or proof of her entrance into Texas is not currently available. However, his oldest daughter, Orpha, may have come to Texas with him at that time.  Orpha, the widow of James James, filed entry papers for Robertson’s Colony for herself and her two small children on January 14, 1836.  Shortly after her arrival in Texas, she married Elisha Anglin and had a large family before her death sometime after 1860.   Seth received two Mexican land grants containing 4,605 acres in present-day Falls County on August 18, 1835.

Part of the Parker group settled four miles east of present-day Elkhart in Anderson County, where they established the first protestant church in Texas.  The remainder of the group settled in present-day Limestone County and built Fort Parker for protection from Indians.  In 1835, Silas Bates built a cabin at Bates Spring where the Groesbeck City Park is now located.

In early spring of 1836, the Parker settlers participated in the Runaway Scrape.  Fearing Indian attacks and the advancing Mexican Army, they traveled toward safety in Louisiana.  They halted their journey after reaching the Trinity River, which they were unable to cross because of flooding.  On April 23, they received news that Santa Anna had surrendered at San Jacinto.  They then returned to Fort Parker by way of Fort Houston near present-day Palestine where they remained for a few days.  Leaving their other family members at Fort Houston, Seth and Silas Bates, David and Evan Faulkenberry, and Abram Anglin returned with the Parkers to present-day Limestone County.

Seth and Silas Bates were working in the fields near Silas’ cabin, when Fort Parker was attacked by Comanche and Kiowa Indians on May 19, 1836.  Both rendered aid to the survivors of the massacre and traveled with one group to safety at Fort Houston.  They may have also been among a group of men who later returned to bury the remains of the dead.

Seth Hurin Bates died on October 15, 1860 and was buried in the Glenwood Cemetery, which is now called Fort Parker Memorial Park.  A Texas historical marker was erected at his grave site in 1962.