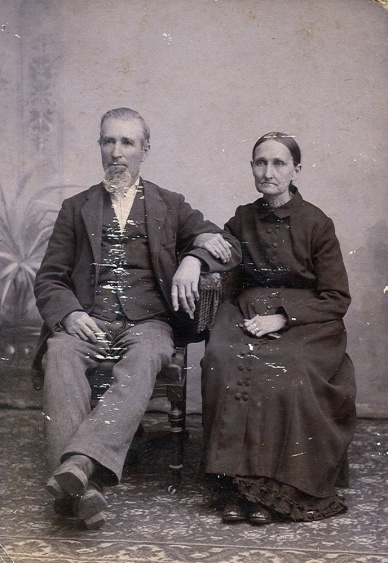 Mary Ann Powell was born in Tennessee on January 2, 1823 and was the daughter of Archibald and Telitha Berryman Powell.  According to her son, Hampton Steele, the Powell Family migrated to Texas in 1833.  In a speech delivered on Steele Day at the Joe Johnston Camp (Confederate Reunion Grounds) on July 26, 1923, Mr. Steele said, “Then there was a colony of people that made arrangements to come to Texas.  There were the Powells, Grimes, Berrymans, McIntires, and Montgomerys.  They all came out together.  It was a long trip by wagons but they came along just the same.  They got to the Sabine on Christmas Eve.  There they camped for the night.  The next morning they crossed the river and then they were in Texas.  Mother says she ate Christmas dinner in Texas 1833.  They moved on until they got to where Grimes County is now.  They stopped there and built cabins.”

Mary Ann married Alfonso Steele in Grimes County on September 27, 1838.  They had ten children: Hampton, Alonzo, Alvarado “Rado”, Francis “Frank”, Leonard A., Mary Ann, Alice M. and three children who died in infancy.  When Alfonso and Mary Ann and their three oldest children migrated to present-day Limestone County in 1844, there were only 13 other families living there.