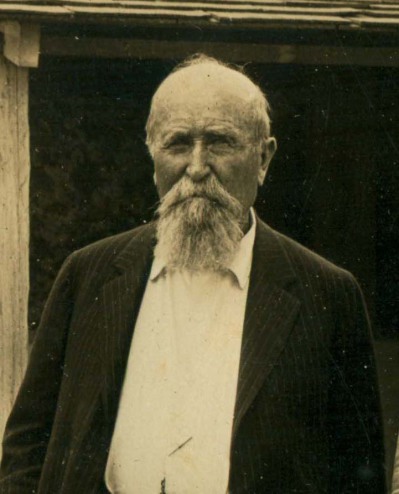 Hampton Steele was born in Grimes County on August 2, 1839.  He was the eldest son of Mary Ann Powell and Alfonso P. Steele.  In 1844, he moved with his parents and two brothers, Alonzo and Alvarado, to what is now Limestone County.  Part of his account of this move, which he wrote in 1925, is given as follows:

If you had been a spectator down in Grimes county about a hundred miles southeast of here, 81 years ago, last November, being the year 1844, you would have observed an old home made wagon, the old wooden axle kind-the only kind we had in that day and time.  That wagon was standing behind a log cabin.  There was a small like man and a little blue-eyed woman and three little boys around that wagon, and they were loading that wagon with their house-hold goods which did not amount to much.  We had no bedsteads to go in the wagon, no rocking chairs at all, no dresser and no stove.  The bedstead was a fixture to the cabin, the old one post bedstead.  All old Texans know how they built them and we used the three-legged stools for chairs.  Our cooking vessels consisted of skillets and a frying pan and two pots, one large pot, and one small pot that we used to boil vegetables in.  That was our household plunder.  We had two or three straw mattresses, and I must not forget the old spinning wheel that had to go to spin the thread to make our clothes with.  The wagon was loaded, the oxen brought up and hitched to the wagon and their faces turned to the northwest, another pioneer family going to the frontier to help blaze the way for our great civilization that we have today…

I will relate an incident that happened.  We had been on the road about a couple of days.  I didn’t like to ride in the wagon.  I wanted to be out on the road throwing rocks at the birds.  We were coming down a long slanted hill towards a creek where we were going to camp for the night.  Father was riding his horse along in front of the wagon a little ahead.  He happened to look back towards the top of the hill and saw two persons on the hill. I was out behind the wagon apiece.  He hollered to me to look at the Indians.  One glance back was enough.  I sure went to the wagon in a hurry.  So we camped there for the night. The Indians proved to be two negroes out after some hogs.  Father said he didn’t know but what they were Indians when we first saw them.  So all went well.  We passed the night there and the next morning we moved out on our journey through the wilderness towards our destination.  We came up on the east side of the Navasota river until we struck the old San Antonio road, the old road that was made by the Spaniards which led from San Antonio to Nacogdoches.  We crossed over the river there to the west side of the river.  There was not much road through the wilderness then, just a kind of trail road made by buffalo hunters coming out to the prairie to kill buffalo.  We came through Boon Prairie which is in Robertson county along up Duck creek along where old Eutaw used to be just east of Kosse, came out of the woods at a point of timber where old Governor Brown settled afterwards, which was known as the Gentry Point.  The time we came here that place was called Spillers Point.  My father told me that there was a hunting party came out to the prairie to kill buffalo and one of the men was named Spillers, and the Indians got after them and killed Spillers at that point, whence at an early day it was always called Spillers Point.  We were out of the timber now upon the great prairie, the great and beautiful expanse that reached across this great empire state of Texas, so with our faithful oxen we moved on; we were getting near our journey’s end now, and we crossed Steele’s creek, at what is known as the old Tidwell place now, though there was no settlement there then.  Alas, after our tedious journey we landed about two miles from where Groesbeck is now, in the forks of Rocky creek and Frost creek.  There we built our cabin of post-oak logs, the old stick and dirt chimney and the old one post bedstead was erected.  That cabin was built without a nail being used in it. The door was made of three foot boards by boring a hole through the board and into the upright with a gimlet and pegging the boards on with wooden pegs, and the door was hung on wooden hinges. I dare say that the present generation today would not know how to commence to make and hang such a door.  Well, now, who was here when we got here?  Just thirteen families. There was L. A. Stroud, Elisha Anglin, Moses Anglin, John Anglin, Forest Pfeifer, William Burns, Silas Bates, Samuel Nelson, George Cox, J. D. Smith, and a man by the name of Baker; that’s thirteen, we made fourteen…

When our cabin was finished so we could be sheltered father put his oxen to the wagon to go to the mill to get some corn ground.  As we moved up father traded some cattle for some corn at the old San Antonio crossing down on Navasota River, to a man by the name of Franklin who had a horse-mill.  So he had to go back down there to get the corn ground into meal.  It is about 50 miles, a pretty good step to go to mill.  That was the hardest problem that we had to contend with when we landed here-to get bread and salt.  Now you can just imagine those little boys watching for that wagon to return with that meal.  We had plenty of meat, deer and buffalo.  All you had to do was take the old rifle and go out and get it.  Now, if I were to tell this young generation today that this boy at that time had to at times live on meat without bread or salt to go with it they would think I was just fooling them.  They would look at me just as though they didn’t believe it, though those things happened with the early settlers.  Some places were worse than others.  So, after several days that wagon returned with the meal.  Then we were all happy.  Mother was very careful to make that meal go a long ways for we did not know where the next was to come from.  The next spring, that is, in the spring of 1845 there was a large herd of buffalo that came down on the south side of Frost creek just below where the railroad now crosses the creek.  My recollection is it was on a Sunday; so father saddled up old “Jim”, his faithful standby and took his rope, and Uncle Powell and H. P. Banks took the dogs and the old rifle and the fun began.  Father roped one, about a two-year-old, and Uncle Powell shot one and wounded it and the dogs were after it, and behold that buffalo made for the cabin with the dogs after it.  Uncle and Banks made it into the cabin and shut the door.  There was a window in the cabin and as the buffalo would come around the house they would shoot it.  After a bit the Buffalo walked off a pace and dropped down dead.

Now, reader, where do you reckon those three little boys were while all that racket was going on? Right up in the corner of the house on top of the bed.  Father was having a time with the one that he roped but he got up to where he wanted to kill it.  So, we had plenty of meat to do us for awhile.  That was the last large herd of buffalo that come to the settlement.  They scattered out just a few in a place.  I just remember that Uncle John Anglin killed his one day under that big old elm tree that used to stand in the city of Groesbeck.

Mr. Steele attended the first school in Limestone County.  He wrote, “The first school that was taught in the county was a little cedar log house about 14 feet square with a dirt floor and split log benches.  That school was taught by a man named John Ward… That school was taught in May and June 1846.  There were only about fourteen scholars… The house belonged to Silas Bates.  He built the house at that old spring in 1835 when Parker Fort was built; so the next year 1847 the people got together and built a log school house especially for school purposes.”

On December 2, 1858, nineteen-year old Hampton married Lydia Francis Smith, one of four orphaned girls of John D. and Elizabeth Nelson Smith.  He wrote, “Lydia and I were married right on top of Horn Hill at Uncle Sam Nelson’s residence; and there came up a blue norther directly after supper and snowed like everything.  The next morning it was bright and clear.”  Hampton and Lydia had five children: Mary Isabel “Belle,” John D., Henry Hampton, Leslie Kosta, and Phoenix.  Lydia died on December 15, 1866.

Two years after Lydia’s death, Hampton married Martha Leona Chisum, the daughter of John and Mary Chisum who came to Limestone County in 1855 and settled on Steele’s Creek.  Hampton and Martha had four children: Alice, Leslie, Thomas, and Nora. Martha died in late 1878 or early 1879.

Hampton enlisted in the Confederate Army at Springfield and served in Sweet’s Regiment.  He was crippled while his regiment was on the Arkansas line, but not in battle.  He received a discharge.  After his recovery in 1865, he joined Ford’s command and was involved in a campaign against Union soldiers at Brownsville.

Hampton was very active in politics, first as a Democrat and after 1876, in other parties, serving as a delegate to Austin in several conventions and once from the Seventh District to the National Convention in Omaha, Nebraska.  Later in life he was a nominee on the People’s Party ticket for County Tax Collector and served as Tax Collector and Assessor for one term.  He also served as County Commissioner of Limestone County for several years.

Although he operated a mercantile store for two years, most of his productive adult years were spent raising cattle and general farming.  He wrote several newspaper articles about the history of Limestone County, which were later compiled into a book, “The History of Limestone County, 1833-1860.”  Most of the information contained in the book comes from his first-hand accounts, which makes it a valuable source for early county history and its earliest settlers.

Hampton Steele died at Marlin in Falls County on February 26, 1928 and is buried in the Mexia Cemetery next to his third wife, Sophie. 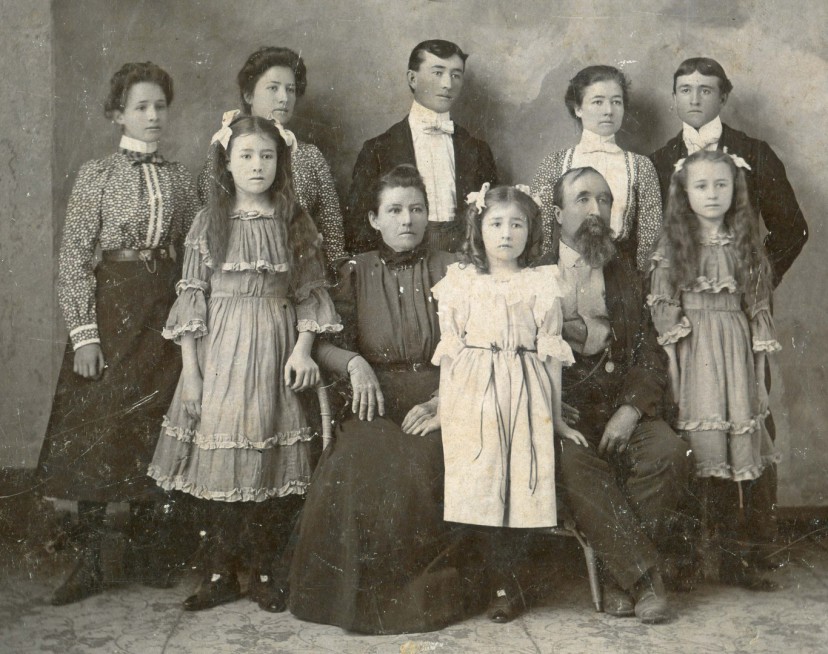 Hampton Steele with his third wife, Sophie, and their eight children
Return to First Families Page