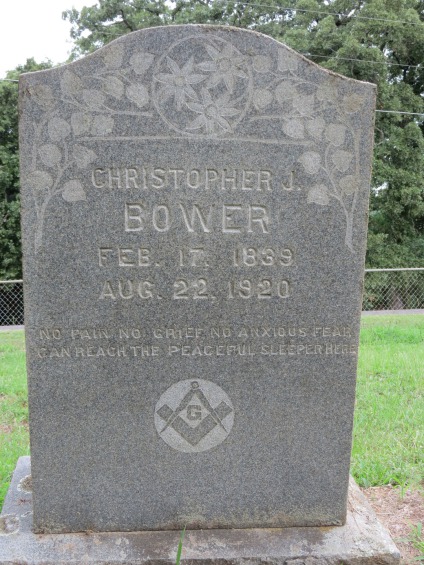 When Christopher was ten, The Bower Family immigrated to the United States from Germany to escape conditions caused by political unrest.  Sailing from Bremen, Germany aboard the Brig Herschel, the Bower Family landed in Galveston, Texas on January 24, 1850.  The occupation of Christopher’s father was listed as “farmer” on the ship’s passenger list.  The family settled in Limestone County where they engaged at once in farming.  Early Limestone County resident, Hampton Steele, wrote several newspaper articles about the history of Limestone County, which were later compiled into a book, “The History of Limestone County, 1833-1860.” Concerning the Bower Family, Mr. Steele wrote, “ The Bowers family came here about the year 1851…They lived on old man Elisha Anglin’s place two or three years.  Then they bought a place not far from Groesbeck’s location now…they could not talk a word of English when they came here.  I know that father (Alfonso Steele) hired John (Christopher’s brother) to work for him and we boys that worked with him had a great deal of fun trying to teach him to talk English.  He was a good hand and a hard worker.”

Concerning Christopher, Mr. Steele wrote, “Chriss had a stoppage in his speech and he stuttered and when we boys would get together on Sunday we would tease Chriss to hear him try to talk.  We would get him excited and he could hardly talk at all.  I remember one time we all met at old man Elisha Anglin’s on Sunday.  Uncle Elisha had a peach orchard and it was summer when peaches were ripe and we boys were in the orchard and we got to throwing peaches at Chriss to hear him try to talk and holler at us.  Chriss never forgot that day.  The last time I met Chriss at Mexia we got to talking about old times and went over the peach orchard scrape.”

During the Civil War, Christopher enlisted in Co. B, 10th Texas Infantry, Nelson’s Regiment.  The regiment was captured at Arkansas Post in January 1863.  Christopher was the only member of his company to escape capture. He and two other men from the regiment went to Pine Bluff, Arkansas, where they joined the 8th Texas infantry Regiment of Walker’s Division.

Christopher was a Mason and a Democrat who served many times as a delegate to the Democratic convention.  He was also an active member of Joe Johnston Camp No. 94 of the United Confederate Veterans of Limestone and Freestone Counties.  The Bowers were members of the Methodist Church.