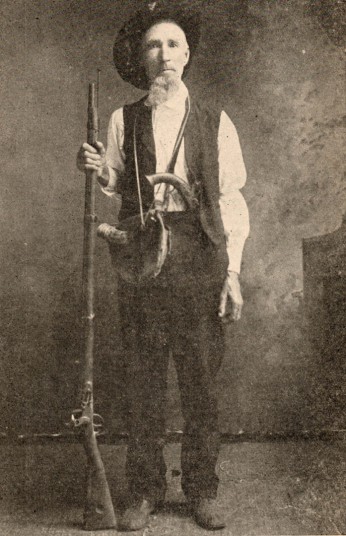 Alfonso Parcot Steele, the son of Susan McCarty and Stephen P. Steele, was born on April 9, 1817 near the Salt River in Hardin County, Kentucky.  In September 1834, seventeen year-old Alfonso left home to strike out on his own.  He stated, “I had nothing there and decided I would start out for myself and make something…”  He traveled by boat down the Mississippi River to Lake Providence, Louisiana where he gained employment with a Mr. Richardson.  Joining Captain Daggett’s company of volunteers in November 1835, he traveled to Texas to participate in Texas’ fight for independence from Mexico. Crossing the Sabine River sometime between Christmas and New Year’s Day, Captain Daggett’s volunteers traveled to Washington on the Brazos but soon disbanded because Texas had not yet declared independence.  Some of the men remained in Texas, including young Alfonso, who was hired by a local hotel owner named Roberts.  One of his tasks was to grind corn into meal.  He related, “I ground corn on a steel mill to make bread for the men who signed the Declaration of Texas Independence.”

After independence was declared on March 2, 1836, Alfonso joined a small group of men under the command of Joe Bennett, which was heading to San Antonio to join Colonel Travis at the Alamo.  Upon reaching the Colorado River, the men received news that the Alamo had fallen.  They then traveled along the river and joined General Sam Houston’s army near Beeson’s Crossing.  Alfonso was assigned to the Second Regiment under the command of Colonel Sherman.  During the Battle of San Jacinto on April 21, 1836, he was severely wounded in the chest, and while lying amongst dead and dying Mexican soldiers, he was nearly bayonetted by one of the Texas regulars who thought he was an enemy soldier.  His account of the battle follows:

After dinner on the 21st we received orders to prepare for battle.  We advanced in the following order: Houston, with artillery in the center, the cavalry on the right and Sherman on the left.  The Mexicans had thrown up breastworks out of their baggage about one hundred yards south of a point of timber, where they had stationed their artillery.  Santa Anna’s right wing was placed in a thick grove of timber.

When we got up pretty close, General Houston sent word to Colonel Sherman to attack this position.  We were ordered to move forward and hold our fire until orders were given.  When we got up within sixty or seventy yards we were ordered to fire.  Then all discipline, so far as Sherman’s regiment was concerned, was at an end.  We were all firing as rapidly as we could; and as soon as we fired every man went to reloading, and he who first got his gun reloaded moved on, not waiting for orders.  I got my gun loaded and rushed on into the timber and fired again.  When the second volley was poured into them in that timber they broke and ran.  As soon as I got my gun loaded again I ran on a little in front of our men and threw up my gun to shoot, when I was shot down.  Dave Rusk was standing by me when I was shot.  He told some of the men to stay with me, but I told him, “No, take them on.”

One of our own men in passing asked me if he could take my pistol, but by this time I was bleeding at the nose and mouth so I couldn’t speak; so he just stooped down and got it and went on.  After lying there awhile I managed to get to a sitting posture and drink some water I had in a gourd.  This stopped the blood from coming from my nose and mouth.  While I was sitting thus one of our men who had been lying behind came along and asked me if I was wounded.  I told him I was, and he said, “I will stay with you, then.”  I told him, “All right; please go and bring me a gourd of water.” While he was gone after the water I got up to see if I could walk.  I had lost so much blood when I had walked five or six steps I got blind and couldn’t see.  I sat down by a little sapling.  After sitting there a few minutes I could see again.  About this time the fellow got back with the gourd of water.  Just as he went to hand me the water a couple of Mexicans came running toward us.  I suppose they had hid in the grass until our men had passed, and began to “jabber” something.  I said to the fellow with me, “Shoot one of them Mexicans.”  He said, “I can’t do it; they want to surrender.”  I said, “I don’t want any more prisoners; hand me my gun and I will shoot one of them.”  He handed me my gun (which was lying where I had fallen) and I shot one of them down; the other ran off.  The fellow said, “It won’t do for us to stay here in this timber.”  I said, “Well, you can go; I can’t.”  “I will go and get you a horse and carry you out,” he said.  He went and got a horse and carried me out and put me among a lot of dead Mexicans.  I was so blind I could hardly see anything and I sat down on a dead Mexican.  While I was sitting there some of our regulars who had stayed at the Mexican breastworks and were sticking their bayonets through the wounded Mexicans came along and one of them had his bayonet drawn to stick through me, when General Tom Green, who belonged to the artillery corps, stopped him.  Then I was put on a horse and started towards our camp.  No one went with me, but the horse carried me in all right.  That night I was carried across the bayou to De Zavalla’s residence, which he had given up as a hospital.

After spending several weeks in the hospital, Alfonso recovered from his wound. He eventually settled in present-day Grimes County where he married Mary Ann Powell, the daughter of Archibald and Telitha Berryman Powell, on September 27, 1838. They had ten children: Hampton, Alonzo, Alvarado “Rado”, Francis “Frank”, Leonard A., Mary Ann, Alice M. and three children who died in infancy.  When Alfonso, Mary Ann, and their three oldest children migrated to present-day Limestone County in 1844, there were only 13 other families living there.

For his service in the Army of Texas, Alfonso received land grants in three areas totaling more than 8,000 acres.  Although he sold certain tracts and traded others for land more to his liking, he retained enough to become a prosperous stockman and farmer.

During a commemorative service in Mr. Steele’s honor when he was just past ninety, the minister spoke of Mr. Steele by saying, “He enjoyed no educational advantages, not having attended school a day in his life – he can neither read nor write – he has lived an exemplary and upright life and approaches the grave as one who wraps the drapery of his couch about him and lies down to pleasant dreams.”

Alfonso Steele was the last survivor of the Battle of San Jacinto, and a large portrait of him hangs in the Senate Chamber of the State Capitol. 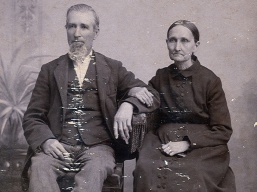 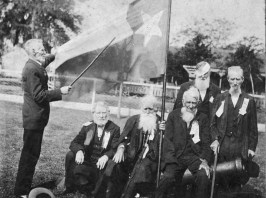 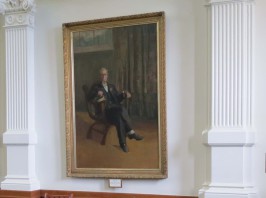