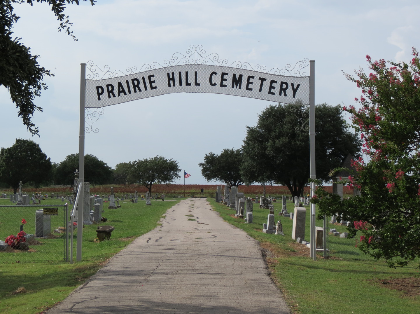 The Prairie Hill Cemetery came into existence in 1894 and was named for the community of Prairie Hill.  The community name came from the elevation between Christmas Creek and the Navasota River on which the town is situated.

In all probability, the first settlers came to the area about 1830.  In 1860, Marcus Perry built a general merchandise store in Prairie Hill.  After the Civil War, many families from the South including several Confederate veterans settled near Prairie Hill.  The greatest increase in population occurred between 1870 and 1880.

In 1892, Prairie Hill had a population of 200 with five churches, two doctors, one dentists, one druggist, two hotels, one butcher shop, one livery stable, two general stores, and one barber shop.

J. R. Leathers and wife, Medora, donated three acres to the Prairie Hill Baptist Church of Christ and the deed was filed on June 11, 1890.  The church was dedicated on Sunday, July 18, 1890.

Memorial services were held on May 25, 1958 at 2:30 p.m. at the Prairie Hill Baptist Church.  A committee comprised of R. Q. Ashcraft, J. H. Murphy, O. D. Russell, Bess Hargrove, and Bobbie Kirkpatrick was elected for the formation of a Prairie Hill Cemetery Association.  It was established that a memorial service would be held each year on the fourth Sunday at 2:30 p.m.

The Prairie Hill Cemetery Association was incorporated in the State of Texas on January 7, 1975.  A trust was chartered with the State of Texas on January 13, 1975.  A perpetual fund for the care of the cemetery was established.  The interest from this fund and contributions made during the year are used for the maintenance of the cemetery.  The original directors of the association were Oscar Russell, Jesse Murphy, Ira Murphy, and Walter Renfro.

The cemetery has 12.332 acres of land made up of five deeds.

The cemetery is divided into four sections.  Sections A and B are the oldest parts and have never been laid off in rows.  When sections C and D were added to the cemetery, the grave sites were measured off to form uniform rows.  A paved road goes around the north and east and through the center of the cemetery to divide it into sections.  A chain link fence with four gates surround the cemetery.  Each gate has the name “Prairie Hill Cemetery.”

The additional acreage acquired in 2000 was for future expansion and has not been incorporated into the main part of the cemetery as of this date.

The Prairie Hill Cemetery has been in use since 1894.  Many old families return their loved ones “home” when they pass on.  There are approximately 1400 marked graves and an unknown number of unmarked graves.  Early records for Section A and B were destroyed by fire and there is no record of the unmarked graves in those areas.

Perhaps the most important person, historically, buried in the Prairie Hill Cemetery is Albert Forest Lauderdale who was born on December 3, 1897 and died on September 8, 1967.  He was the chauffer for General Douglas McArthur and held the rank of Master Sergeant.

There are believed to be 15 Civil War veterans buried in the cemetery, but only the following eight have been verified: Jahue C. Higgins, James Gordon Jackson, Joe G, Johnson, Berry Dees, W. D. Michum, Albert Winter Hitt, Mastin Asbury Hinton, and Theophilus Moody.  Numerous graves of World War I and World War II veterans are located in the cemetery as well as a few veterans of the Korean War and Vietnam Conflict.  Each Memorial Day small flags decorate all the veterans’ graves.

Five generations of the Benjamin and Leatha Person family, the John Phillip Coker family, and the Edmond Forrester family rest in the Prairie Hill Cemetery.

A memorial service is held each year on the fourth Sunday in May at 2:30 p.m.  The veterans who are present are recognized for their service to their country.  Relatives and friends travel long distances to attend.  It is a reunion for many of them. 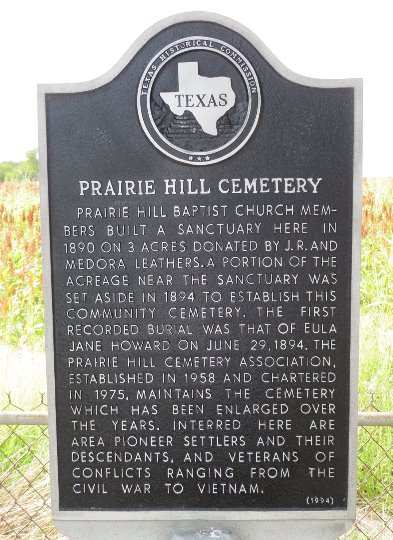 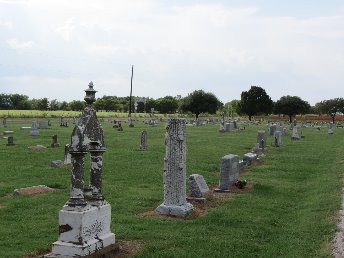 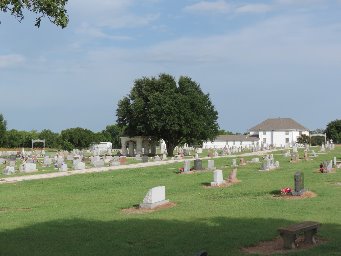