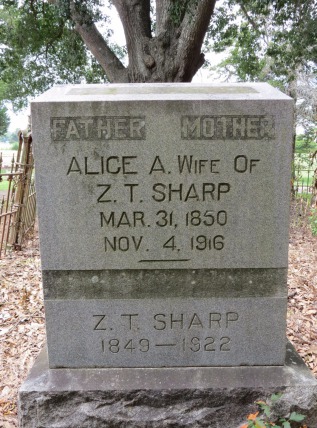 Zachary Taylor Sharp was the son of Spencer and Sarah Henderson Sharp.  He was born in Weakley County, Tennessee on May 2, 1849 and was six years old when he came to Limestone County with his parents in 1855.

On December 8, 1875, he married Alice A. Sanders, the daughter of James Monroe andNancy Jane Ratliff Sanders.  Alice was born in Arkansas on March 30, 1850 and moved to Texas with her parents in 1860, settling near Palestine in Anderson County.  The Sanders Family later settled near Willow Springs in Limestone County in 1870.  Z. T. and Alice resided on his parent’s homestead in the Honest Ridge community.  They had six children who lived to adulthood: Zelda T., Junius S., James Earl, LuraJane, Bertha May and Laura T.  Two children died at about four years of age and one in infancy.  Zelda T. Sharp was a longtime teacher in the Groesbeck I.S.D.