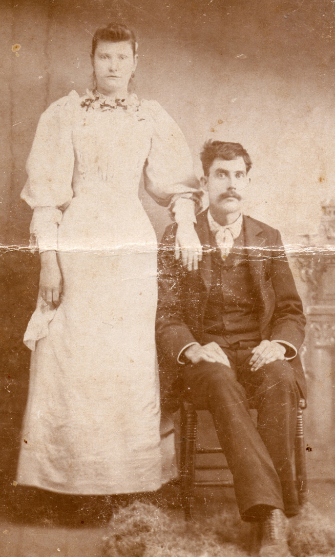 Sarah Jane “Sallie” Henson was born on March 25, 1877 in Limestone County, Texas.  She was the daughter of John A. Henson and Mary Louise Phillips, who were married on February 20, 1871.

Sallie Henson married Benjamin Franklin “Frank” Reagan on January 1, 1896.  Frank and Sallie built a home and farmed land at Barnett Prairie in the Oletha area, which Sallie had inherited from her father.  Adjacent property was later purchased.  They had six children: William Franklin “Willie” (1897-1973), Mary Edna (1901-1973), Velma Estelle (1905-1988), Jesse Howard (1907-1961), Ruby Virgie (1910-2004), and Ida Jewell (1912-2008).  Since the schools at Oletha only went through the 8th grade, Frank and Sallie rented a farm a few miles south of Groesbeck on the Old Thornton Highway so Ruby and Ida could attend high school in Groesbeck.  All of their children, except Mary, married during the time that Frank and Sallie lived at that location.  In 1939, they purchased a home and property on Long Bridge Road in Groesbeck.

Frank and Sallie were members of the Church of Christ attending worship in Oletha and later Thornton and were charter members of the church in Groesbeck.  Frank died in Groesbeck on January 12, 1958.  Sallie died on April 19, 1965.  She broke her hip eight months prior to her death and was living in Abilene with her daughter, Velma, when she died.  Frank and Sallie Reagan are buried in the Thornton Cemetery.