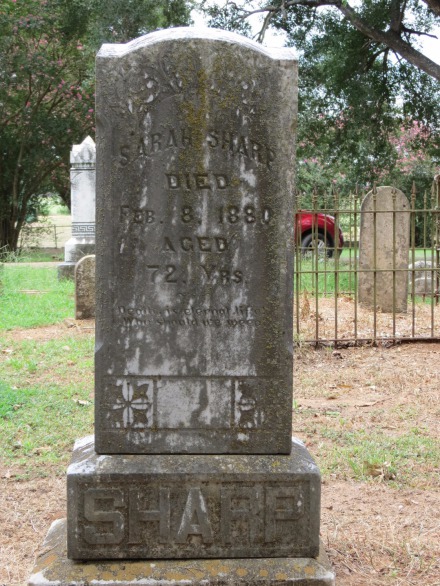 Sarah Henderson was born in Kentucky circa 1810.  She married Spencer Sharp circa 1825 in Weakley County, Tennessee.  The couple continued to reside in Weakley County until 1855 when they moved to Limestone County, Texas.  In 1857, they purchased 328 acres in the Honest Ridge community.

Six of their seven sons served in the Confederate Army during the Civil War.  Only Anthony and Thomas returned home.  Nathaniel Henderson died from illness while serving in Arkansas; William died in prison at Camp Douglas, leaving behind a wife and two young children; John died during the Battle of Corinth; and Ezekiel died in Tennessee, ironically in Weakley County where he was born.

Spencer Sharp became ill and died in 1863 while he and Sarah were in Arkansas taking care of Henderson during his illness.  Sarah died in Limestone County on February 8, 1880 and is buried in Fort Parker Memorial Park.