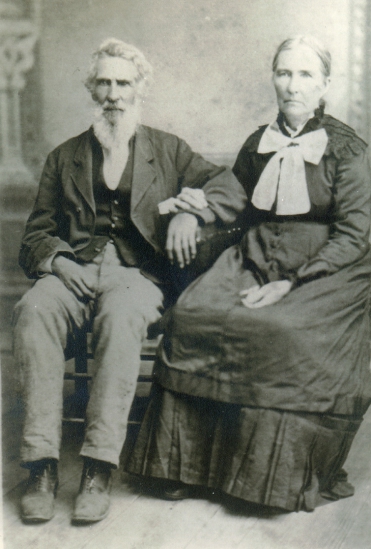 Logan A. and Jane Elizabeth Stroud

Logan Almaren Stroud, the son of Ethen and Nancy Trammell Stroud, was born in Morgan County, Georgia on October 10, 1814.  When he was about 16 years old, he moved with his parents to Chambers County, Alabama, where his father and uncles acquired land holdings in excess of 10,000 acres.

The Stroud Family moved to Robertson County, Texas circa 1837.  Logan had previously visited Texas with his father in 1836 to look things over.  After returning to Alabama, his father announced that the family would be moving to Texas.  Logan spent the next four years helping his family establish a plantation at the site of present-day Calvert, which he was a partner with his father and uncle, Beden Stroud.  In 1839, this partnership paid taxes on almost 11,000 acres, 117 slaves, 107 cows, four mules, and one watch.

Logan Stroud married Jane Elizabeth Harlan Cooke, the widow of A. W. Cooke, on May 19, 1842.  Jane was the daughter of Joseph and Nancy Craig Harlan.  She was born in South Carolina on December 21, 1823.  Her mother died when Jane was three months old, and her father remarried about eight months later.  He moved the family to Robertson County, Texas in February, 1837.  Jane was first married to A. W. Cooke on October 17, 1838, but he soon died.  No children were born from this union.

Logan and his new bride moved to Burr Oak Springs in 1842 to establish a new plantation, while his father remained at the Falls on the Brazos to close out the family’s holdings there.  Ethen Stroud did this and joined his son at Bur Oak Springs in 1844.  After his father died in 1846, Logan settled in earnest to build a large and permanent plantation known as Pleasant Retreat. He consolidated holdings in the plantation by selling off the large but distant tracts of land left to him by his father.  His mother continued to live on the plantation until her death in 1864.

In the early days after his family had settled at Bur Oak Springs, bands of Indians were continually raiding the settlements on the Texas frontier and committing horrible atrocities against white settlers, but Logan was able to keep peace with the Indians and thereby able to turn his attention to the improvements and development of his plantation.  He was good friends with the Tehuacana and Alabama tribes.  As an example of his good relations with the Indians, the entire tribe of the Alabama would appear about every other year and encamp on the huge lawn of the plantation home.  While they were there, Logan would attend to their needs, be it food, clothing or medical attention.  One more than one occasion, his Indian friends warned him of possible threats from hostile bands.  There was one time when Logan did fear for the safety of his family and moved them to Cherokee County for a brief stay.  Jane Stroud was pregnant at the time and gave birth to their son, Joe, while there.

During the span of time from 1846 to 1860, Pleasant Retreat enjoyed its most prosperous time with the production of corn and cotton as the main focus.  Because of its huge barns and storage bins, the plantation was chosen by the Confederate Government as a central storage facility.  All kinds of supplies were stored there, and Logan was charged with its safe keeping and disbursement.  This not only pertained to military supplies but to rations allotted to the war widows and children.  Much of these supplies he gave himself without requests for repayment.  As the Yankee Blockade became effective, Logan sent his cotton to Satillo, Mexico by wagon train.  On the return trip the same wagon train would bring supplies that had previously come from the North.

Logan Stroud was the largest slave owner in Limestone County having over 150 slaves just prior to emancipation.  Unlike some slave owners, Logan was not cruel to his slaves.  He and his daughter, Teresa, would make rounds twice a day to check on the well-being of each slave.  They made sure everyone had plenty to eat, and medical attention was provided promptly if needed.  Documentation in the Stroud Archives provides evidence that there was also a great deal of mutual trust and respect between slave owner and slave.  Some slaves were given responsibilities, including being entrusted with carrying firearms for the protection of the plantation, especially during the early period when Indian atrocities were a possibility.  Records also indicate that slaves were given the responsibility of taking cotton to market and returning with the payment without supervision, even as far away as Mexico where each could have easily remained as a free person.  Some descendants of Stroud slaves have also stated that the Strouds would not separate families by selling members.

At the conclusion of the Civil War, the Emancipation Proclamation was read from the front porch of the Stroud’s plantation home.  As Logan Stroud began reading the proclamation, he became emotional, and one of his daughters had to finish reading the document to the now freed black people. His emotion was couched in the knowledge that they were in no position yet to take care of themselves. He cared for them and knew that they would be mistreated by many of the white people. They certainly were for many, many years.  As the freed slaves left the plantation, Logan assured his family that they would be back, and that they must do whatever they could to help them.  Many later returned and contracts were made in which the freedmen were provided clothing, food, a place to live, and even monetary benefits in exchange for their employment.  Some were eventually able to purchase or were given land from the Strouds. The affection for Logan Stroud can be attested by the large number of his former slaves who paid their respects after his passing.  His obituary states that “the most touching scene of all was when the old slaves, those who in former days were bound to him by chains of bondage, came in troops and gazed for the last time upon the face of the old ‘Master’, and that though the fetters of bondage had been broken, the ties of affection were still strong, and with bowed heads they mingled their tears with the others who stood around the bier.”

Logan Stroud was a Democrat, a Master Mason, and served as a trustee of Trinity University, which was located at Tehuacana in Limestone County.  When the town of Groesbeck was established by the railroad in 1871, he was one of the first people to purchase lots and was a trustee of the short-lived Groesbeck College.  Two of his daughters, Amerith and Teresa, were the first persons from the county to attend Baylor University.

Logan and Jane Stroud had eleven children: Joe M., Almaren Logan, Corenth, Lela, Ellen Craig, James Robert, Ethen A., William, Teresa, Amerith, and Suda.  Jane died on February 1, 1905, and Logan died on February 5, 1911.  Both are buried in the Springfield Cemetery, which is located in Fort Parker State Park.  Buried with them in the family plot are three of their children, William, Ethen, and Suda; a 13 month old nephew, “Little Owen;” and a long-time friend and hired hand, Burr Coulson.