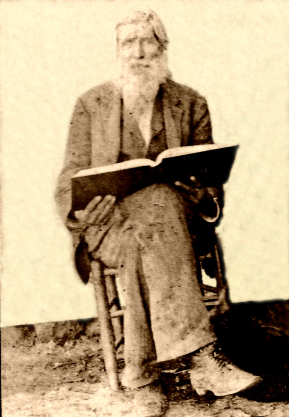 Joseph Green Johnson was born in Green County, Alabama on June 14, 1835.  He was orphaned as a very young boy and lived with an uncle until adulthood. His parentage is not known at this time.  Joseph was said to have been well over 6 feet tall and weighed more than 200 lbs.

In the 1860 census, they were living in Bowling, Leon County, Texas. Joseph’s occupation is listed as a waggoneer.  On March 10, 1862, he enlisted in the 22nd Texas Infantry Company B under the command of Colonel Richard B. Hubbard. (In his wife’s application for Confederate Pension, she lists her husband’s name as John Joseph Green Johnston.) This company participated in the following battles: Young’s Point, Louisiana June 7, 1863; Operations against the advance of the Federal Army under General Banks from Franklin, Louisiana on March 14-26, 1864; Wilson’s Farm, Louisiana April 7, 1864; Sabine Cross Roads, Mansfield Louisiana April 8, 1864; Pleasant Hill, Louisiana April 9, 1864; Operations against General Steele from Little Rock to Camden, Arkansas, including engagements at Mark’s Mills, Arkansas April 15, 1864 and Jenkins Ferry, Arkansas April 30, 1864.  Although this company wasn’t engaged in earlier battles during the Civil War, Joseph Johnson worked primarily behind Union lines as a freighter running guns and ammunition for the Confederacy. The following excerpt is a Union based account of the Battle of Jenkins Ferry taken from Pictorial History of the Civil War, pg. 593 by Alfred H. Guernsey and Henry M. Alden – 1866 The Fairfax Press -- reprint

“On the 28th of April 1864, General Steele abandoned Camden, crossed the Washita and continually skirmishing with the enemy’s cavalry, proceeded to the Sabine. By this retreat he had just escaped disaster. General Kirby Smith, having thrust back General Banks, was now prepared to strike Steele. As it was, Smith assailed the rear of the retreating column as the latter was crossing the Sabine at Jenkins Ferry. A portion of the army was already across the river, and thus the brunt of the attack fell upon the two rear brigades until reinforcements were brought up by General Rice. The enemy succeeded finally in turning the left, but the line was restored, and by noon the attack was repulsed, and the army crossed the bridge. No artillery could be used on account of the nature of the ground. The Federal loss was 700 killed and wounded. That of the enemy was estimated as over three times that number.”

Between 1872 and 1874, the family made their move to Limestone county settling in Springfield. During the years after the war, Joseph Johnson made his living as a freighter as well as farming. He hauled freight from Galveston to the Mount Calm – Delia area taking three to four months for each trip. He had a young boy with him, about the age of 10 or 12, to help with the horses.

“Mr. Johnson kept good horses. These were really a temptation for the road agents of that period of time. One night after they had made camp and were fixing to eat supper, a man came by and ate with them. The stranger ate his meal and left – or pretended to leave. Mr. Johnson and his helper went to bed, grandpa taking one of his pistols under the covers with him. He was wakened a little while later by the stranger pulling the cover off of him. We never did know what Grandpa did after that, but since no harm came to either of them, we suppose he took care of the stranger in one way or another. Later, after Grandpa and the boy went back to bed, Grandpa said he kept hearing what sounded like a horse running. It was the young boy’s heart beating!!" Story told by Lloyd M. Parten of Brazoria, Texas (grandson of Joseph Green Johnson) in 1977

On September 5, 1882, Joseph’s wife, Mary Ann, died and is buried in the Old Bethel Cemetery near Springfield. Joseph’s daughter, Mary Ava was attending Trinity University at Tehuacana at that time.

On November 14, 1885, Joseph married another widow, Mary Alice Downs Ingram, daughter of Absolom Jackson Downs and Mary Lott. Mary Alice had two daughters; Mary, who died young and Fannie. On January 16, 1885, Mary Alice gave birth to Joseph’s fifth and sixth children, twins Winnie Johnson Parten (1885-1964) and Walter Johnson (1885-1939). Another daughter, Josie Johnson McFarland (1888-1980) was born in Springfield.  On July 14, 1889, the family was received by letter as members of the Baptist Church of Christ in Prairie Hill, where Joseph was appointed as clerk. One more child was born to this union, a daughter Maude Johnson Cavasos Gibson (1890-1979). Joseph Johnson was a farmer as well as freighter. He often hired young men from Baylor to come help work his farm. He was a great lover of books, education and music and had beautiful penmanship. He farmed in the Prairie Hill area for over fifteen years.

On February 19, 1904, Joseph Johnson gave his letter of dismissal to the Baptist Church of Christ and struck out for Oklahoma Territory where he became a homesteader.  These Oklahoma homesteaders had to “prove up” on their land in order to receive the deed. This meant that they had to stay on the homestead working to improve it for a certain amount of time without leaving it unattended.  He had two homesteads in Oklahoma. Joseph Johnson wrote many letters home to his daughter Winnie while homesteading in Oklahoma. The following is an excerpt from a letter posted from Russell Oklahoma.

I am back from breakfast in my little house all alone. It is dark and cloudy, wind from the north, this is going to be a rough bad sept I fear. I will send or go to office today though I will not send this letter off till I get a letter from you all as I have not one anser from you all since my other letter.

Well Winnie, I have just come from the office with your welcome letter and was so glad to hear from you and to hear you was well and doing so well. Glad to hear of your big boy, I will send you a name. Name him Baley or Joe. Baley Walter named his boy Talbert after Judge Talbert of Hobert. He was judge when Dave was tried for his life. Walter and Lizzie read your letter, Pearl was not at home. Will has a farm house with large rooms and has got the cash to pay any time. To prove up on my land we had to stay on it 8 months clost to home before we could get a deed to it. I have staid clost all the time until the time to get my deed, it will be October or Nov. But your ma has not staid a month all put together. I could make something if I could get a deed to this place, it may all come out all rite yet. My proof may go through all rite. I have some mity good men sticking clost to me all the time. George and Fannie are living in the old dugout one of the first ever put up in this country. The old dugout I fixed up for cotton pickers the first year I came up here. My little house is new just put up last fall. I think your ma wants me to go back to Texas to Charley and Maud but I cannot do that. I will close, write as soon and as often as you can. Your father JG Johnson”

By the time his daughter’s letter reached him, the “big boy” he was referring to in the letter had contracted typhoid and died. She named him Linard Ray.

I will ans your letter recvd some time back. I will start to Texas about the 25 of this month. I think the hard weather will be over by that time, that will be Thursday. I want to then make it down by Saturday and be with you all on Sunday. Tell Jim to see the other Boyd, Billy and Jim Mc and Joe Hodges and all the children if he has time and send me a little, it will not be much, all a little. Will write you agan in time and where to send if you all send the money order to Blake as it is a money order office. You ma said she would not come til summer as one of us has to stay with our little home. She will stay with Fannie and George. I bought 1 gallon of onion sets today, ½ bushel Irish potatoes to plant after the full moon which is the 6. I will have Irish potatoes and onions to eat when I come back next summer. Your father JG Johnson"

Joseph’s health began going downhill due to tuberculosis he contracted during the Civil War. His land was given to his son Will, and Joseph moved to Cleburne Texas to live with his daughter Maud. He wrote one last letter to his daughter, Winnie dated March 19, 1912 Cleburne Texas.

I will write you all a few lines as your ma and Maudie is writing. This leaves all up but I am very porley and feble, my lungs and kidneys wearing me out. Some days I feel very purt some days I am hardly able to move. Though I have been coughing so many years the older I get the worse it hurts me. I don’t know how long I will hold out. Hope this will find you all well and doing well. Excuse my bad writing, I am too trimbly to write good. Anser when and as often as you can. Jim tell me how you are getting on farming. The farmers are not doing much in this country, they appear too careless here about planting. They all had to buy their feed in town this winter. They are hauling feed by our house every day. This country round Cleburne too poor to raise good peas. Yesterday was butiful. This morning dark foggy and cloudy. This is a mean climate never get two days alike together. I will close. Your father JG Johnson, Cleburne Texas, Route 6 Box 11”

Joseph Green Johnson died on June 14, 1912 at the home of his daughter in Cleburne, Texas. His body was transported by train to Coolidge and then brought home to Prairie Hill, Limestone County for burial. His daughter, Mary Ava Johnson Benson is buried next to him.