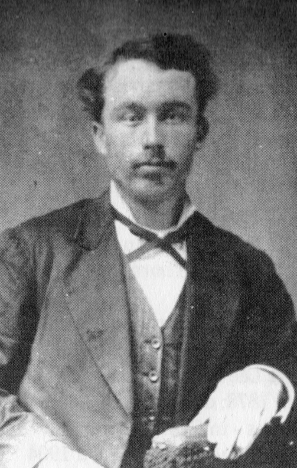 Johnathan Harlan was the son of Dr. Isaiah Harlan and Nancy Henry.  Isaiah Harlan was born on May 4, 1798 in Laurens, South Carolina and was the youngest son of Aaron and Elizabeth Harlan.  Isaiah was still a child when his father died on August 6, 1806, but he inherited, upon reaching adulthood, the family homestead and other property.  He was an outstanding scholar with interests in the sciences and languages: Latin, Greek, and Hebrew.  He chose to become a doctor, and while owning and managing large estates, practiced medicine much of his life.

Nancy Henry, the daughter of Mathew Henry and Elizabeth Hunter, was born circa 1800 onboard a ship sailing to America from Ireland.  The family settled in Laurens, South Carolina where Nancy married Isaiah Harlan on December 12, 1817.  In 1819, Isaiah, Nancy, and their daughter, Martha, migrated to Fayette County, Indiana where the family stayed for about a year before settling in Parke County, Indiana.

In the Fall of 1834, the Harlan family migrated to Texas settling first near Nacogdoches. On February 20, 1835, Isaiah received a grant for one league of land in Robertson County (present-day Falls County) and settled his family there in 1837.  He later moved his family to Montgomery County near present-day Willis.  He was elected to the State Legislature after Texas became a state in 1845, but he declined to serve.  At the time of his death on January 29, 1847, Isaiah Harlan owned ten thousand acres of land in Robertson (now Falls) and Montgomery Counties.  He was buried on what was then his own land, now the Willis Cemetery.  Nancy Harlan continued to live in Montgomery County with her three youngest sons until her death on April 10, 1852.  She is also buried in the Willis Cemetery. (Note: Isaiah Harlan was the uncle to Jane Harlan Stroud, wife of Logan A. Stroud-also recognized as a First Families ancestor.)

Jonathan Harlan was born on October 2, 1828 in Parke County, Indiana.  He came to Texas with his parents in 1834.  He was the eldest son living at home when his father died in 1847, and he was named the administrator of his parents’ estates when his mother died in 1852.

Jonathan married Emily George on January 8, 1857 in Montgomery County.  Jonathan and Emily soon settled on a portion of Jonathan’s land in the eastern part of Falls County.  Their son, George Isaiah, was born on May 2, 1860.  Emily died about three weeks later on May 24 and was buried in the Blue Ridge Cemetery in Falls County.  George died on November 22, 1867 and was buried next to his mother.  Their graves are not marked and have been lost to time.

During the Civil War, Jonathan served in Company F., 20th Texas Infantry Regiment of the Confederate Army.  This regiment was assigned to the Trans-Mississippi Department and served in Texas, performing guard duty along the coast from Galveston to the Sabine River.

Jonathan and Mary Harlan moved to the Thornton area in Limestone County in 1885.  Jonathan died on March 23, 1891, and Mary died August 17, 1922.  Both are buried in the Thornton Cemetery. 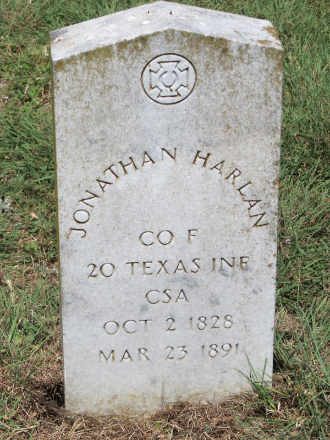