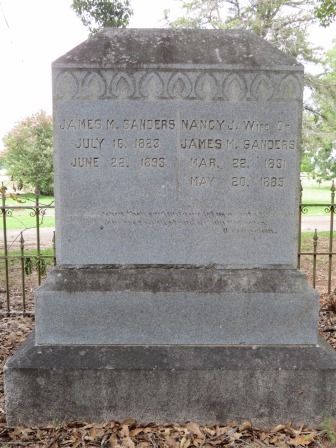 James Monroe Sanders was born in Alabama on July 16, 1823.  He was the son of Thomas Jefferson Sanders, a native of Virginia. He later moved to Arkansas where he married Nancy Jane Ratliff on December 16, 1847.  Nancy was born in Tennessee on March 21, 1823 and was the daughter of William Ratliff and Nancy Boyd Ratliff, natives of North Carolina.

James and Nancy Jane migrated to Anderson County, Texas in 1863 where James was engaged in farming for seven years.  They then moved to Limestone County, six miles northwest of Groesbeck, where he bought a farm of 137 acres where he remained until moving to Groesbeck in 1888.  One source dated 1893 states that he had 500 acres of land and had a half interest in a steam-powered cotton gin.  He was a Democrat and was a member of the Masonic Order.

James Monroe Sanders died on June 22, 1893.  He and both wives are buried in Fort Parker Memorial Park.