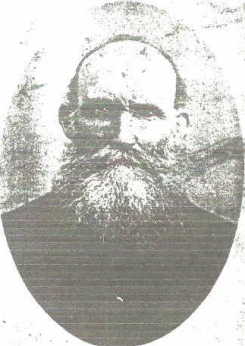 James Alfred Head was born in 1797 in Georgia.  On December 27, 1818, James married Elizabeth (Betsy) Seal.  She was the daughter of Thomas C. Seal and Rachel Baxter and was born June 16, 1804 in Oglethorpe Co., GA.  The couple stayed in Georgia until 1835 when they moved to Texas.  In October of the same year, James enlisted in Silas M. Parker’s ranging company which is thought to be the beginning of the Texas Rangers.  He served for 4 months being discharged at Fort Sterling in January 1836.

After the Texas Revolution, James and Betsy moved to Navasota County, which is now known as Brazos County, the location of College Station.  They began farming and James served in a company of minutemen.

In 1840 he was registered to vote in Washington County which is just west of Brazos Co.  By 1841 the couple is again living in Navasota/Brazos County.  On March 1, 1841, James was elected justice of the peace of Navasota and later that year was elected to the House of Representatives of the Sixth Congress where he served until 1842.

He returned to Navasota/Brazos County to farm.  Elizabeth died in 1846.  James was elected chief justice of Brazos County in September 1848 and was re-elected in August 1850.  In the following August of 1851, he resigned from the bench and by December of 1852, James was a resident of Robertson County.

Because James Alfred Head was an early settler of good reputation and because of his service in the Texas Revolution, James received land grants totaling 17,789 acres in Robertson County.  When Limestone County was formed in 1846 some of the land was now located in Limestone Co.  There are several deeds showing that James bought and sold land in Limestone County.

The community of Headsville was named in honor of James Alfred Head, and the larger area where he lived as early as 1852 was called Head’s Prairie.  In the 1860 census of Limestone Co., James is living in Eutaw and his daughter Lucinda and son-in-law John Wilson and their children are living with him.  James is listed in the 1867 Limestone Co. Voters Registration.

James Alfred Head died in 1872 and was buried in the family cemetery, Head Cemetery.  In 2012 the graves at Head Cemetery were moved to Ebenezer Cemetery.

James and Betsy had 11 children: 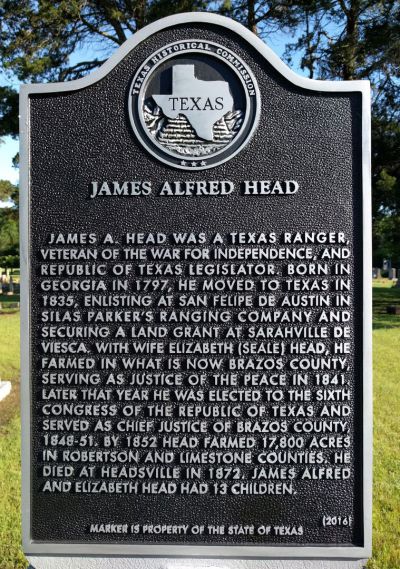