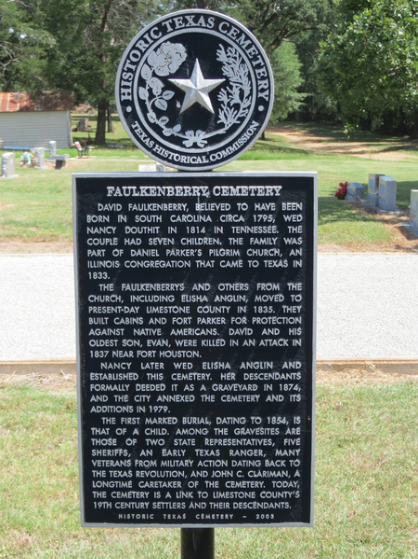 David Faulkenberry was the son of John Faulkenberry, who was born about 1770 in Lancaster County, South Carolina.  John moved with his family to Jackson County, Georgia in about 1796.  In 1809, he is listed on the Rutherford County, Tennessee tax record, and by 1812 appears on the Franklin County, Tennessee tax record.  In Franklin County he received a land grant.  On December 8, 1829, John sold his land in Tennessee and moved to Shelby County, Illinois where he is listed on the 1830 census.

The Faulkenberry family was closely associated with the Parker and Anglin families, and when the Parker family established the Pilgrim Church and moved from Illinois to Texas in 1833, David Faulkenberry and his family moved with this group to Texas.  After the Pilgrim Church caravan arrived in Texas under the leadership of Daniel Parker, it traveled to an area southeast of Stephen F. Austin’s Colony called Grimes Prairie.  The group stayed there for about a year and then moved north.  Daniel Parker and several members of the congregation decided to settle in an area of present-day Anderson County.  It was here, near the present-day community of Elkhart, that they built the first Protestant church in Texas.

The remaining members of the group traveled westward to an area along the Navasota River in present-day Limestone County.  Each family in the group had received a grant for a section of land.  They built cabins and cleared the land for farming.  Because Indians were still a problem in this part of Texas, they decided to build a fort for protection.  The Bates, Faulkenberry, and Anglin families lived on nearby farms.  David Faulkenberry received his land grant of 4428 acres on March 13, 1835, which was located in the Andres Varela survey.

On May 19, 1836, Comanche and Kiowa Indians attacked Fort Parker.  David and Evan Faulkenberry were at their farm when they were warned by L. T. M. Plummer of the attack.  David and Evan Faulkenberry, Elisha Anglin, and L. T. M. Plummer arrived in time to free L. D. Nixon, Lucinda Parker, and her two youngest children from the Indians.  The attack on Fort Parker left five dead, two wounded and five taken captive.  Evan and David Faulkenberry were with one of two groups of survivors, which managed to reach the safety of Fort Houston in three days.

After the fall of Fort Parker, David and Nancy Faulkenberry and their family remained near Fort Houston in Anderson County.  Unfortunately, David and Evan were overcome by Indians along the west bank of the Trinity River on January 28, 1837.  David died after being wounded and after swimming to the east side of the river.  Evan's body was never found.  Abram Anglin, who was with David and Evan, went to Fort Houston for help.  When help returned, they found David's body and buried him near there in an unmarked grave.

Nancy Faulkenberry and her remaining children later returned to Limestone County and lived on the David Faulkenberry land grant. Nancy acted as administrator for her husband's estate. She later married Elisha Anglin.

The Faulkenberry Cemetery was established when Nancy set aside land for burial purposes behind the Faulkenberry home after the death of a Faulkenberry infant that died on September 10, 1854.  The tombstone reads "E. Faulkenberry" and gives the birth of this child as March 11, 1854.  No records showing the identity of this child can be found, but the six-month old infant must have been a grandchild of Nancy Faulkenberry.  This family cemetery was located directly behind the Faulkenberry cabin that David and Evan Faulkenberry had built earlier.  Mrs. Rosemary Parish, a descendant of David and Nancy Faulkenberry, remembers that when she was a child her grandfather took her to see this cabin prior to it being burned.  She remembers it as "a one-room log cabin, which had a dirt floor, mud fireplace, and one door." Family members were buried in this cemetery over the next several decades, and many of their descendants have also been and continue to be buried there.  Eventually, the cemetery would become a burial ground for other residents of the area.

Back to First Families Page