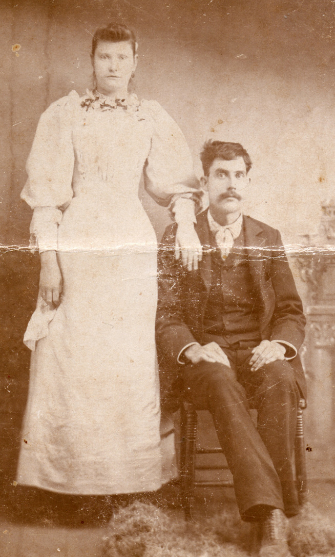 Benjamin Franklin “Frank” Reagan was born in Barry County, Missouri on July 4, 1870.  After the death of his first wife in Itawamba County, Mississippi in 1853, Frank’s father, Alexander Carmichael Black Reagan, and his five sons moved to Texas.  ACB married his second wife in Cass County in 1854 and was living at Bald Prairie in Robertson County, Texas by 1860.  After the death of his second wife, ACB married Frank’s mother, Talitha C. Whitley, circa 1864.  Frank’s older sister, Callie, was born in 1865.  During Reconstruction, ACB moved the family to Barry County, Missouri where Frank and two of his sisters, Missouri and Neomi Jane, were born.  The family was living in Limestone County, Texas when his youngest brother, Joseph Lee, was born in 1874.

Frank married Sarah Jane “Sallie” Henson, a native of Limestone County, on January 1, 1896.  Frank and Sallie built a home and farmed land at Barnett Prairie in the Oletha area, which Sallie had inherited from her father, John A. Henson.  Adjacent property was later purchased.  They had six children: William Franklin “Willie” (1897-1973), Mary Edna (1901-1973), Velma Estelle (1905-1988), Jesse Howard (1907-1961), Ruby Virgie (1910-2004), and Ida Jewell (1912-2008).  Since the schools at Oletha only went through the 8th grade, Frank and Sallie rented a farm a few miles south of Groesbeck on the Old Thornton Highway so Ruby and Ida could attend high school in Groesbeck.  All of their children, except Mary, married during the time that Frank and Sallie lived at that location.  In 1939, they purchased a home and property on Long Bridge Road in Groesbeck.

Frank and Sallie were members of the Church of Christ attending worship in Oletha and later Thornton and were charter members of the church in Groesbeck.  While living in Oletha, Frank was also a member of the Center Point School Board.  Frank died on January 12, 1958, and Sallie died on April 19, 1965.  Both are buried in the Thornton Cemetery.