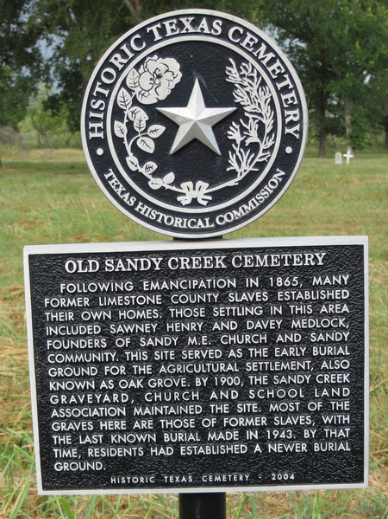 It was on the plantation of Logan Stroud and his wife, Jane Elizabeth Harlan Cooke Stroud, where a number of the slaves of Limestone County gathered on June 19, 1865, to hear Logan Stroud read “General Orders Number 3”, the order which freed the slaves in Texas more than two and one half years after President Abraham Lincoln signed the Emancipation Proclamation. The 1860 Limestone County census recorded the slave population as 1,072.

Once the Negroes of Limestone County became free, they began the process of forming their own community life.  The ex-slaves laid the initial plans for the communities that formed the foundation of Negro life in that section of Texas.  Sometime between 1870 and 1875, Davey Medlock and Sawney Henry settled in the north section of Limestone County and founded the Sandy M.E. Church and Sandy Community.  Most of the early settlers of the Sandy Community were the ex-slaves of Captain R. S. Barber.  Some of the ex-slaves responsible for the building of the Negro community of Sandy were:  Sawney and Viney Henry, Davey Medlock, Sam Favors, Phil Favors, Bill Hobbs, Lige Hobbs, Dow Hobbs, Nance Medlock, Easter Medlock, Nan Sparks Briscoe, Bettie Sparks Johnson,  Menervia Carroll, Allen Sparks, Alfred Sparks, Terrell Sparks, Jance Dancer, Tilman Henry, Tilman Cotton and Zear Medlock.

The area where Sandy Community was settled was part of the original Texas land grant to William McCoy, consisting of two-thirds of a league and one labor.   This land is identified in the Texas General Land Office as the William McCoy Survey, and is located approximately 8 miles west of Mexia, Texas.   The last will and testament of William McCoy, dated April 19, 1866 and filed in the Limestone County Record of Wills, June 25th A.D, 1866, page 353, divided McCoy’s land among his wife and six children, one of which was Martha McCoy.  Martha McCoy’s 320-acre tract was located in the Southeast corner of the original McCoy survey and included the portion where the Sandy M.E. Church and Community (and ultimately the Old Sandy Creek Cemetery) were subsequently formed and settled.  There are many references to this area as “Oak Grove”, but the name chosen for the community by the early Negro settlers was and still is “Sandy”.

Between 1866, when Martha McCoy inherited her land, and 1875 when the Sandy Community was fairly well settled by the ex-slaves, Martha’s 320-acre tract of land passed through several owners; ex-slave Sawney Henry owned at least one eighty-acre tract out of this 320 acre Martha McCoy tract, which had been deeded to him by R.S. Barber.  Other Negro settlers had also purchased land in the Sandy Community, and as the community grew, the settlers needed a formal place of worship and a designated place where Negroes could be buried in the community.

A tract of land (approximately 2 acres) identified as Oak Grove Church and Graveyard, with .25 of an acre given for Graveyard, was set aside on a portion of the land owned by Sawney Henry and his wife, Viney, for use by the ex-slaves.    There is no record of the land ever being deeded to the cemetery or graveyard by the Sawney Henry family; however, down through the years the land surrounding the 2-acre tract has changed hands many times and in the Limestone County Deed Records, there are at least nine recorded references made to its existence, which reference the “Oak Grove Church and Graveyard lot where 1/4 of an acre was given for Graveyard”, with the earliest reference made January 2, 1881.

As the early settlers became more established in their community life and as additional Negro settlers moved into the Sandy Community, the community leaders began making long-range plans for the growth of the community.  Based oral history related by older inhabitants of the community who could remember their grandparents who settled the community, and supported by the Echols handwritten note, in the late 1800’s the Negro settlers formed an association and formally adopted the name of Sandy Creek Graveyard, Church and School Land Association, which over the years came to be known as Sandy Creek Graveyard Association.

The Sandy Creek Cemetery Association records show that on November 19, 1904, the Association, with Zeno Echols, W. L. Kelly, Frank Carroll, L.K. Waggoner, and W. S. Henry acting as Trustees, purchased 10 acres of land from R. S. Barber.  Of the 10 acres, 2 were allotted for church, 3 were allotted for school and the remaining 5 acres were allotted for a cemetery (replacing the Henry Cemetery and graveyard).  The early members of the Association (referred to as “Shareholders”) consisted of some 46 ex-slave families, whose shareholder rights were passed down to a member of the next generation.  As the community began to hold worship services in the new location, the property initially used for Oak Grove/Sandy M.E. Church was used as additional burial ground and was absorbed into the Old Sandy Creek Cemetery.  This tract of approximately 2 acres has been in tact and deemed to constitute the entire older cemetery since 1904, when the Association purchased land for the “new” cemetery.

The 10 acres of land purchased by the association are located approximately 1/10 of a mile from the Old Sandy Creek Cemetery, on the west side of what is currently LCR 191.  The school building no longer exists and the land initially used by the school has been absorbed into the Sandy Creek Cemetery; however, the Sandy M.E. Church has evolved into the present church, which is now Union Memorial United Methodist Church.

Once the transition was made to conducting all Sandy Community burials in the new cemetery, for a period of approximately 30 or 40 years, little or no maintenance was done on the Old Sandy Creek Cemetery, causing it to fall into a major state of disarray.  Under the leadership of Business Manager, Vernon (Joe) Carroll and then Historian, Euma Murphy, clean-up efforts began on the Old Sandy Creek Cemetery in 1996.

As nearly as can be determined from a combination of visual survey of the cemetery, interviews with descendents regarding the cemetery and word of mouth history, the Old Sandy Creek Cemetery is the final resting place of some 200 ex-slaves, a few of their sons and daughters and an even fewer number of their grandsons and grandaughters.  The earliest marked grave is of a young girl, November 2, 1881, daughter of E. C. and L.C. Carroll.  According to information published in the Mexia Daily News May 17, 1997, which was based on interviews with older Sandy descendants whose grandparents settled the Sandy Community, the oldest former slave in the Old Sandy Creek Cemetery is Anne Johnson, who died in 1908 at the age of 94 and was born in 1814.  Based on visual inspection, or “walking” of the cemetery, the last burial in the Old Sandy Creek Cemetery that can be documented by marker is of WWII veteran, Oskar R. Thomas, who died July 16, 1943.

Due to the age of the cemetery and the economic circumstances of the early Negro settlers, standard type gravestone markers are rare.  Many graves were marked with nothing more than a rock, some of which contain engravings.  Approximately 26 regular type stones in the cemetery have been identified and catalogued.  By far, the tombstone in the cemetery that draws the most attention is that of Dowl and Martha Hobbs.  The stone is 40 inches wide at the base and seven and a half feet tall.  “History” revealed on the tombstone shows that Dowl Hobbs was born on December 25, 1827 and died on June 28, 1910.  His wife, Martha, was born on March 2, 1838 and died November 2, 1900.

The immediate goal of the Sandy Creek Improvement Committed is to complete the remaining small clean-up projects and continue to supplement the existing natural landscaping with flowering trees and shrubs, as nearly as possible, locate all existing stones or markers in the cemetery and place some sort of decorative plant at each site, and finally place two large urns filled with decorative outdoor plants. 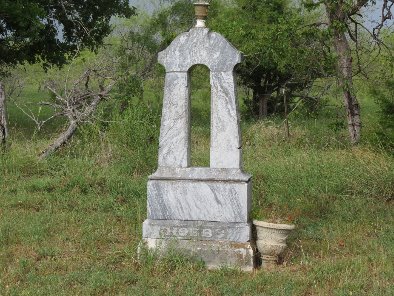 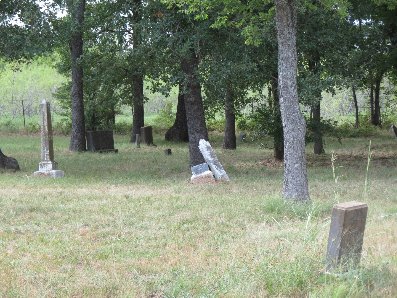