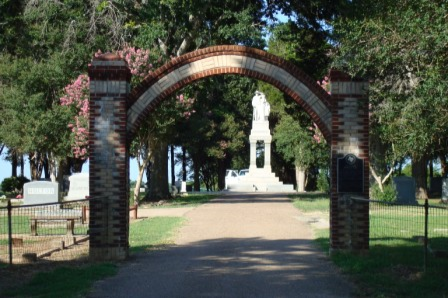 In 1832 Daniel Parker gained permission from the Mexican government to settle in Texas.  The Parkers and other members of the newly-formed Pilgrim Baptist Church came to Texas in 1833 from Crawford County, Illinois.  Daniel and most of his followers settled near the present-day city of Elkhart in present-day Anderson County. The remaining members of the group traveled westward to an area along the Navasota River in present-day Limestone County.  Each family in the group had received a grant for a section of land. They built cabins and cleared the land for farming.  Because Indians were still a problem in this part of Texas, they decided to build a fort for protection.  The group at Fort Parker included Elder John Parker, his wife, Sallie, and their sons Benjamin, James, and Silas.  Benjamin was unmarried.  James and his wife Martha Parker had six children.  Two of their children, Rachel Plummer and Sarah Nixon, were married with children of their own.  Rachel was the wife of L.T.M. Plummer, and Sarah was the wife of L.D. Nixon.  Silas and his wife Lucinda Parker had four children.  Other members of the group included the mother-in-law of Sarah Nixon and her sister, Elizabeth Kellogg; Mrs. Duty, the mother of Martha and Lucinda Parker; Samuel Frost, his wife and children; George Dwight and his family; and a Mr. Lunn.  Silas Bates, David Faulkenberry, and Elisha Anglin and their families lived on nearby farms.

On May 19, 1836, a group of Comanche and Kiowa Indians attacked Fort Parker.  James Parker, L.D. Nixon, and L.T.M. Plummer had left early that morning to go work in the fields.  Around 9:00 the Indians appeared about 400 yards from the fort.  They sent a group of warriors forward with a white flag.  Benjamin Parker went out to greet them and was asked about a good camping ground near the springs and asked for some beef.  He returned to the fort and reported that he believed that the Indians were planning to attack.  Against the wishes of the others, he returned to try to negotiate with the Indians.  He was immediately surrounded and killed, which motivated the Indians to attack the fort.  By this time several of the settlers had fled the fort or were trying to escape.  Silas Parker was killed outside the gate trying to protect some women and children.  Elder John Parker, Sallie Parker, and Elizabeth Kellogg were overtaken by Indians a short distance after fleeing the fort.  Elder John Parker was killed, his wife was wounded and left for dead, and Mrs. Kellogg was taken captive.  Samuel Frost and his son, Robert, were killed inside the fort.  Rachel Plummer and her son, James Pratt Plummer, were taken captive.  Also taken captive were Cynthia Ann Parker and her brother, John.  David and Evan Faulkenberry were at their farm when they were warned by L. T. M. Plummer of the attack.  David and Evan Faulkenberry, Elisha Anglin, and L. T. M. Plummer arrived at the fort in time to free L. D. Nixon, Lucinda Parker, and her two youngest children from the Indians.  Evan and David Faulkenberry led one group of survivors to safety at Fort Houston.  It took them 3 days.  A second group, led by James Parker and George Dwight, reached Fort Houston six days after the attack.  The attack on Fort Parker left five dead, two wounded, and five taken captive.

Twelve men from Fort Houston returned to Fort Parker to bury the dead.  The remains of John Parker, Benjamin Parker, Silas Parker, Samuel Frost and Robert Frost were interred in a mass grave under a large oak tree about 1.5 miles from the fort.  Later, as others began to settle in the area, burials continued at the site.  The cemetery was originally known as the Union Burial Ground.

On May 11, 1877, Logan A. Stroud donated the property containing the cemetery to the cemetery trustees: J. T. Davis, J. C. Welch, Benjamin Usry, James Tidwell, and G. M. Jackson.  This donation was a little over four acres in size.  On the same date, Mr. Stroud also sold the surrounding property to Dr. J. D. Rankin and his wife, J. L. Rankin.  The Rankins agreed to provide a right of way and to maintain the gate to that right of way.

As reflected in the deed records, the cemetery has gone under several different names.  As mentioned above, it was first called the Union Burial Ground.  In two deeds dated April 6, 1906 and February 17, 1913, the cemetery trustees purchased two additional tracts of land from W. H. Basden.  During this time, the cemetery was called the Lewisville Cemetery.  Lewisville was a community that developed in the area prior to 1860.  It was named for James L. Lewis, who had established a general merchandise store in the area.  The village was divided into blocks and lots.  There were saloons, stores, blacksmith shops, and grocery stores.  The community had a school that was taught by Mr. and Mrs. Henry Floyd.  At one point, the community had two doctors, Dr. Thomas H. Dennis and Dr. J. C. Welch.

In 1926, 1929, and 1936, the cemetery trustees purchased additional tracts of land from Mrs. M. E. Sullivan.  The 1936 deed included a “strip of land 12 feet in width on either side of lane leading to said cemetery.”  The cemetery was called the Glenwood Cemetery in these deeds.  On May 6, 1947, 4.38 acres plus an additional 10 feet on either side of the cemetery lane was purchased from the children of Mrs. Sullivan.  The cemetery was referred to as the Glenwood Memorial Cemetery in this deed.  In a Right-Of-Way deed to the State of Texas dated April 26, 1950, the cemetery is referred to as Fort Parker Memorial Park.  It still retains that name to the present time.

An additional 3.32 acres was donated to the cemetery by J. R. Todd on December 20, 1990. This addition to the cemetery was dedicated to the memory of James Robert and Lula Ethel Todd and is named Todd Park.  It contains a pond and picnic tables.  One of the stipulations in the deed states, “Todd Park may not be used for burial plots.”

In 1922, the Pioneer Monument was erected in memory of the first pioneers.  It was funded by appropriations of the 37th Texas Legislature and the citizens of Limestone County and the citizens of Texas.  A statue of Silas and Lucy Parker and their daughter, Cynthia Ann, was erected atop the monument in 1932.  The statue was funded by the 42th legislature and donations from the citizens of Groesbeck.  The cemetery received a Texas Historical Marker in 1963. The entrance to the cemetery was a gift in memory of Mr. and Mrs. Abe F. Therrell, Sr. by Mr. and Mrs. Abe F. Therrell, Jr. in 1974.

Fort Parker Memorial Park is an active cemetery with burials being conducted regularly.  It is maintained by a full-time caretaker. 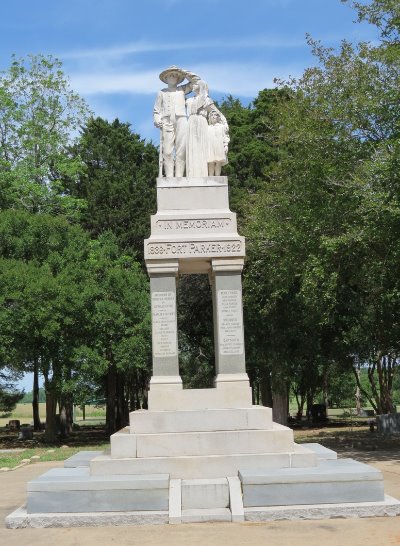 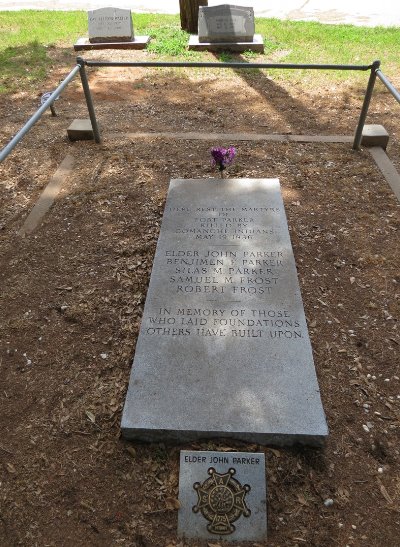