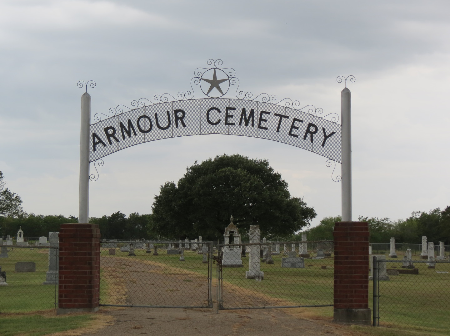 The Armour Cemetery is located about one mile south of Coolidge at the junction of Limestone County Roads 185 and 186.  The cemetery has four sections: Old Armour, New Armour, the Norwegian Cemetery, and the Catholic Cemetery (known locally as the Mexican Cemetery).  Some residents of the area consider these to be three separate cemeteries with the Norwegian and Catholic sections being separate from Old Armour and New Armour.  The old, new, and Norwegian sections are maintained by the Coolidge Cemetery Association with the Mexican section being cared for by family members of those who are buried there.   The cemetery association does consider these four sections as one cemetery.

The Armour Cemetery is the only remaining visual evidence of the community of Armour, which was laid out in 1882 by James Armour.  Originally called Sandy Creek, the community of Armour was home to many of the early settlers of northern Limestone County.  At its peak Armour had several businesses, a school, a post office, two churches, and a population of 100.  Unfortunately, the community quickly disappeared after 1903 when the railroad established the town of Coolidge one mile north.  Merchants of Armour saw more business in the new town and moved their buildings there to be closer to the railroad.

The cemetery is located on property that was deeded to the Sandy Creek Baptist Church in 1879 and 1882.  The first known burial is that of Thomas Griffin Armour who died on June 25, 1881.  Even though the cemetery is the only remaining part of the early community of Armour, it is still an active cemetery.  Descendants of those early settlers are still being buried there.

James Armour was born in Jackson County, Georgia on August 10, 1825.  He was the tenth of fourteen children of Andrew and Rachel Griggs Armour.  After the death of his mother in 1837, James, age 12, moved with his father to Alabama where he lived five years with an elder sister.  “He then at the age of seventeen, started out alone to carve his way through life.  His educational advantages were limited, but naturally intelligent, with a strong arm and a brave heart, he courageously set forth.”

On January 7, 1849, James Armour married N. J. (Narita Jane) Kennedy.  She was born in Georgia but was reared in Macon County, Alabama.  She was the daughter of David and Louraney Sanders Kennedy.  N. J.’s mother died when she was ten.  Her father remarried and moved the family to Alabama.

James and N. J. Armour had ten children.  The Historical and Biographical Histories of Limestone County, which was published in 1893, list them as follows: Andrew died at the age of 28; Uriah married S. A. McClelland of Greer County, Texas; Sallie married J. H. Bull of Limestone County; W. J. Armour; Mary Ann died at age eighteen months; Louraney married C. A. Durham of Limestone County; and three other children died in infancy.

After earning enough money as an overseer of farm work, James bought eighty acres of partly improved land on which he settled at the time of his marriage.  He lived here until 1853 when he moved his family to Freestone County, Texas.  He purchased a farm on Cannia Creek located four miles from the community of Cotton Gin.  In 1859, he moved his family to Tehuacana Hills, Limestone County.  The Armours lived here for three years, during which time James contributed to the establishment of the first school.  James then purchased land west of Tehuacana Hills.  He began to improve it when the Civil War started.  He enlisted in the Confederate Army and served in the Western Division until the end of the war.  After returning home, James became a successful farmer and rancher through his hard work and careful management.

James Armour was a Democrat but did not take an active part in public affairs.  He became a Mason in 1851 and was a charter member of the Armour Masonic Lodge #780.  The lodge eventually moved to Coolidge after many members moved there after the town’s creation. James was also a member of the International Order of Odd Fellows.  James and N. J. were Baptists and were charter members of the Sandy Creek Baptist Church.  James served as one of the church’s deacons.

In 1882, James laid out the town of Armour on his land, which soon became a thriving community.  Originally called Sandy Creek because of a nearby creek of the same name, this area was where many of the first families of northern Limestone County settled.  Sandy Creek was officially changed to Armour with the establishment of a post office on January 29, 1883.  In 1884, the community had two churches, a school district, two steam-powered gristmills, and a population of sixty.  The population grew to 100 in 1890, but fell to fifty by 1896.  F. M. Crawford, T. A. Griffin, Charlie Wood, Robert Reed, and Harve Turner were among the first business owners of the community.

In 1903 the Trinity and Brazos Valley Railroad was built from Hubbard to Mexia, passing about a mile north of Armour.  The railroad company established a new town, Coolidge, along the railroad tracks.  R. T. Bell sold the necessary acreage to the railroad, and an auction was held to sell town lots.  About 1000 people attended with over $8000 worth of property sold.

Merchants of Armour saw more business in the new town of Coolidge and moved their buildings there to be closer to the railroad.  When the post office was moved to Coolidge in October 1903, the community of Armour quickly faded from existence.

The deed records and the land surveys indicate that the Armour Cemetery is located on land that was originally part of the property belonging to the Sandy Creek Baptist Church.  The first known grave is that of Thomas Griffin Armour who died on June 25, 1881.  He was an infant child of James and N. J. Armour.  Burials still take place in the Armour Cemetery, and currently, there are over 700 graves.  With the exception of the Mexican section, the Coolidge Cemetery Association maintains the cemetery. 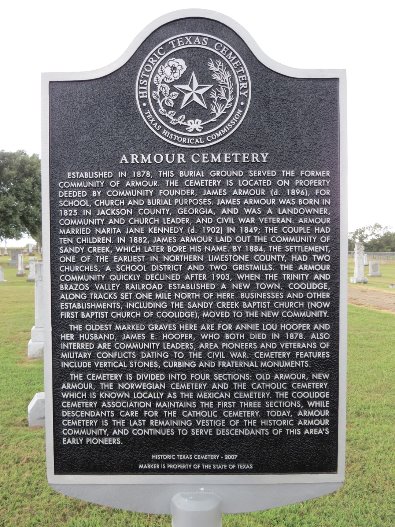